I can now go 8 generations back on my direct maternal line. All of the ladies listed here were born in Northumberland, England. As you can see they did not apply much imagination to naming their daughters. I am grateful my mother decided there had been enough Margarets and Marys by the time they got to me.

My mtDNA haplogroup is U5a1b1*. The asterisk indicates that there are not enough people tested who share the exact mutations to be able to assign the next level. The last three on the list are shown with “unknown confidence” as I do not yet have DNA evidence to confirm my paper trail. 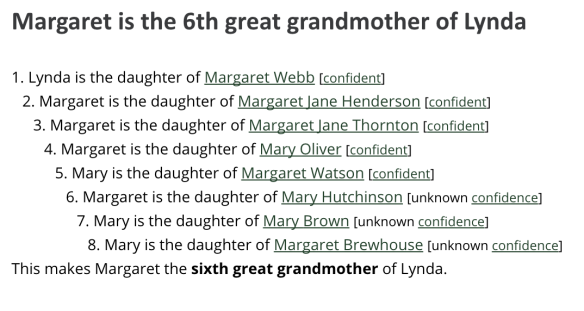 My family history event for January 14th is:

I also have three more recent events on January 14th, two Cracketts and one from a Turner collateral line in the USA.

My family history event for January 10th is the birth of my father’s cousin John Thomas Crackett in 1910. In the 1911 census he is shown as the youngest child of John Thomas (Jack) Crackett, living at Chevington Drift, Northumberland. Mother Emily and older siblings Isabella, Mary, Leonard and Robert also appear on the census. His father Jack is in the banner picture for my blog (back row, 3rd from left).

Having now found an alternative method for following up dates in my tree I can now also report another event 231 years ago for January 10th. My 5th great grandparents, Archibald Henderson and Ruth Weymes, married at St. John’s church in Newcastle-upon-Tyne on January 10th 1785. There are many variant spellings of Weymes. One site gives the names on their marriage record as Archibold Henderson and Ruth Weans.

My family history events for January 3rd include:

My grandparents, Jonty and Meggie Webb (née Henderson), travelled to Canada in 1949 to visit their daughter Mary who had married Canadian Jimmy Ash and moved to Toronto.

A newly found Henderson-cousin, Jayne Handyside of Amble, has found this historical gem while rifling through her family’s old photo box. It is written by my granny and addressed to her brother Randle who was Jayne’s great grandfather. The Archie that is referred to in the postcard is younger brother to Meggie and Randle. He was born in Amble, Northumberland in1907 and emigrated to Canada.

They are clearly having a whale of a time and planning a trip to Niagara Falls, which must have been quite spectacular for them on their first trip abroad.

Those of you who are on facebook and have ancestors from Amble may be interested in joining the group Amble in Old Photographs. This group was started a few years ago by Bartle Rippon and for a while there were only about a dozen of us who participated. Membership has increased exponentially over the past couple of months. Many fascinating memories are being published. Since Bartle is a published author, The Ambler editorial board have asked him to consider putting together a book with Amble memories based on input from the group. If you have any good material hidden away in your cupboards and drawers please dig it out and join the group.

My own experiences on there have been very positive as many previously dangling branches on my Henderson part of my family tree have now attached themselves to the right spot with a little collaboration from newly found family members in the group.

When we cleared out my mother’s house back in 1999 we found an object in her cupboard which we were unsure about. Since neither of us lives in England, this was packed away in a box in my brother’s house and didn’t see the light of day for a while. When we dug it out again our curiosity was piqued and we decided to investigate what it was. It turned out be a “widow’s penny” given to the next of kin of those who lost their lives in World War One. This discovery set us off on the next quest. Who was this David Henderson and why did we have this wonderful memento? He was clearly a relative of my maternal grandmother, born Margaret Jane Henderson, but his name had never been mentioned before.

Further investigation showed him to be my granny’s cousin, David Taggart Henderson, son of her uncle John Henderson, born (1860-1898). Cousin David was only about 5 years older than my granny Meggy, so I assume there were quite close when they were growing up. John Henderson and his wife Mary lost another child in infancy, then Mary went on to marry John Baston and have a second family.

David T. Henderson can be found on the Amble War Memorial. He was an Able Seaman in the RNVR Hood Divsion and you can read more about him at this record on the Commonwealth War Graves Commission. There is also a slightly damaged headstone cross memorial to him, his parents and his baby brother in Amble East Cemetery. I will add that to the blog another time.

Starting with the Crackett, Webb, Turner and Henderson families of Amble and Radcliffe in Northumberland and finding more names in my pedigree as I dig further back. Where did all these fascinating people come from and how did they make little me?

© Lynda Crackett and https://genealyn.wordpress.com 2010-2012. Unauthorized use and/or duplication of this material without express and written permission from this blog’s author and/or owner is strictly prohibited. Excerpts and links may be used, provided that full and clear credit is given to Lynda Crackett and https://genealyn.wordpress.com with appropriate and specific direction to the original content.